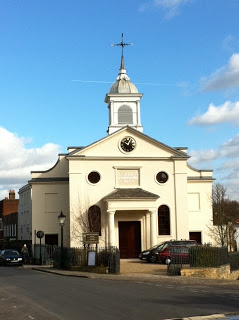 Churches cannot be said to be few and far between in London but the same cannot be said for Proprietary Chapels. These churches are distinct in that they are privately owned. They were erected by private enterprise that saw in many that there was money to be made in

fashionable piety. They actually became vastly successful commercial undertakings from the pew and vault rents. They additionally were licensed for prayer and preaching but fell short of Holy Communion. Presently, the churches operate from offertories meaning that their continued existence is solely dependent on their congregations or on individual wealth benefactors. These chapels have become a rarity.

The main issue is that of ownership. The Church of England is divided into parishes and nearly all of these are owned by the Church of England through the vicar. However single benefactors such as great landowners created proprietary churches when the main parish church was some miles away. This owner would finance the church and the clergy. Therefore these churches were free from the responsibilities of a parish. Many of these churches later became adopted as a parish church as with the population boom in Regency London, more churches were needed to meet the growing number of people.

Proprietary churches were also sometimes used as a means by which to make money. The owner would charge ‘pew rents’ to the gentry who used it and this would cover the costs. When the Church of England absolved them, it was often the locals who raised money to pay for a portion of the running costs.

St John’s Church in Hampstead (Greater London) is arguably one of the last if not the last in London. This church founded in 1813 was established by a trio of landowners and is indicative of these privately funded churches. Once the building was completed in 1823, the church grew rapidly as a result of the population grow, the close association it held with a local school and the prevalence of overseas Christian missionary work. The building itself (listed Grade I) is quite striking with its Regency stuccoed, painted façade and a Doric porch framing the entrance on the outside whilst the inside boasts original examples of one of the few wooden box pews in England.

In the present day as a proprietary church, St John’s retains financial independence but is recognised as being within the London Diocese of the Church of England.  It can be deduced that these churches actually can only be self-supporting and fully operational in areas where the congregation can support it or rather individual benefactors are keen to maintain it. Arguably this unique type of church is quite a rare find in the present day.

Photographer in the City!
0
Next Entry
Related Article

This site uses Akismet to reduce spam. Learn how your comment data is processed.

We use cookies on our website to give you the most relevant experience by remembering your preferences and repeat visits. By clicking “Accept”, you consent to the use of ALL the cookies.
Cookie settingsACCEPT
Manage consent

This website uses cookies to improve your experience while you navigate through the website. Out of these, the cookies that are categorized as necessary are stored on your browser as they are essential for the working of basic functionalities of the website. We also use third-party cookies that help us analyze and understand how you use this website. These cookies will be stored in your browser only with your consent. You also have the option to opt-out of these cookies. But opting out of some of these cookies may affect your browsing experience.
Necessary Always Enabled

Performance cookies are used to understand and analyze the key performance indexes of the website which helps in delivering a better user experience for the visitors.

Analytical cookies are used to understand how visitors interact with the website. These cookies help provide information on metrics the number of visitors, bounce rate, traffic source, etc.

Advertisement cookies are used to provide visitors with relevant ads and marketing campaigns. These cookies track visitors across websites and collect information to provide customized ads.

Other uncategorized cookies are those that are being analyzed and have not been classified into a category as yet.